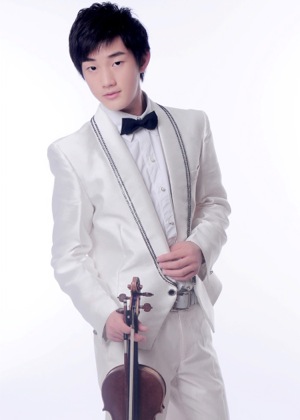 Zeyu Victor Li was born on July 7, 1996 in Huainan City of Anhui Province, China, and began violin lessons at the age of four. At seven he won first prize in the Anhui Provincial Young Musicians Competition and at nine was selected to study with Professor Fang Lei at the Shanghai Academy of Music, where he remained until 2010.

In 2008, sponsored by HOTCHKISS, he made his first trip to the United States as an exchange student.

Activities for 2009 included the 9th National Teenage Violin Competition in China, where he received the golden award and the best performance award. That same year, on the occasion of the 50th anniversary of the Shanghai Music Hall, he performed as soloist with the Shanghai Philharmonic Orchestra, collaborating with conductor Zhang Guoyong. In April of 2009 he was invited to play for Pinchas Zuckerman, who was highly complimentary of his playing.

Victor photoIn 2010, at the age of 14, Zeyu was accepted into the Curtis Institute of Music in Philadelphia, the youngest Asian violinist ever admitted to Curtis, as a student of the prestigious violinist and educator Aaron Rosand. That year he performed at the Shanghai Spring Music Festival, in Calgary (Canada) and, after coming to Curtis, played several concerts at the Kimmel Center in Philadelphia and Carnegie Hall in New York. In November 2011 he played the Sibelius Violin Concerto in D Minor at Curtis, which can be seen on YouTube.

In April 2012, the youngest contestant in the Senior Section of the Yehudi Menuhin International Violin Competition held in Beijing, he received the Composer’s Prize for the best performance of the new Chinese work TIAN JINGLUN Three and a half Phrases.

Rossini, like Handel, had no qualms about reusing his own material for different occasions. He composed La Cenerentola (Cinderella) in a little over three weeks in January 1817 for a January 25 opening, and, because time was so short, he simply lifted the overture from his comic opera La gazzetta (The newspaper), which had opened in Naples in 1816. La Cenerentola proved an instant success, and the Overture remained attached to both works, which gave it much more exposure than had it stayed the sole property of the lesser-known La gazzetta.

Rossini’s mixing and matching of overtures—as in the present case or the famous Barber of Seville Overture, which had been used in two previous serious operas—only points up the versatility of Rossini’s music and the success of certain “magic formulas” he had developed, such as the celebrated “Rossini crescendo.” In Rossini’s Cenerentola the well-known fairy tale is considerably modified so that the matching of a bracelet replaces the fitting of a glass slipper, the Prince’s tutor takes the place of the fairy godmother, and the Prince engages in an identity switch with his valet, but the essence is the same. It matters little that the story of La gazzetta had a different plot involving the doings at a hotel where a father has advertised in the paper for a husband for his daughter, who in turn loves the hotel owner. In either case the Overture makes a lively and engaging curtain-raiser.

Rossini adopts his tried-and-true architecture of a slow introduction followed by a faster main section of the sonata-form type without a development section. His opening presents a number of distinct ideas—a majestic but quiet dotted line in the winds with full-orchestra chords crashing in, a delicate clarinet theme, a horn fanfare that mushrooms, and some quintessential bars of expectancy. The effervescent main theme of his fast section pauses several times before it gets going in earnest as does the second theme, introduced by the clarinet. The celebrated “Rossini crescendo” follows the second theme both in the exposition and in the recapitulation. This truly remarkable generator of excitement consists not only of an increase in volume, but, as described by Rossini scholar Philip Gossett, “a sophisticated manipulation of harmonic rhythm, phrase structure, melodic design, register, dynamics, and instrumentation, carefully controlled to produce the maximum effect.” The remarkable thing is that Rossini must have had this particular crescendo in mind—probably anticipating that Cenerentola would reuse this Overture—because the same energized music reappears appears as the vocal climax of the first-act finale.

Educated through high school in the Cleveland public schools, Robert Ward attended the Eastman School of Music in Rochester, where he studied with Bernard Rogers and Howard Hanson. He moved to New York for graduate work at the Juilliard School, studying composition with Frederick Jacobi and composition with Albert Stoessel and Edgar Schenkman. During the summer of 1941 he also studied composition with Aaron Copland at Tanglewood’s Berkshire Music Center. His First Symphony, composed in 1941, won the Juilliard Publication Award the following year. 1942 was also the year that Ward joined the U.S. Army, for which he served as conductor and composer at Fort Riley Kansas, attended the Army Music School at Fort Meyer, Virginia, and finally worked for the 7th Infantry band and dance band in the Pacific.

Though Ward withdrew many of his early compositions, his Adagio and Allegro, first performed in New York in 1944, and his Jubilation Overture, composed mostly in Okinawa in 1945, survived his self-scrutiny—the Overture became one of his most frequently performed compositions. Following the War, Ward taught at Juilliard, Columbia University, and the Third Street Music School Settlement. From 1956 until 1967 he worked as vice president and managing editor of Galaxy Music Corporation, leaving to serve as president of the North Carolina School of the Arts and composition teacher. In 1979 he was appointed Mary Duke Biddle Professor of Music at Duke University, where he is still professor emeritus at the age of ninety-five.

Through his career as a teacher and publisher Ward continued to compose, achieving greatest celebrity for his opera The Crucible (1961), based on the Arthur Miller play—the opera received both the Pulitzer Prize and the New York Music Critics’ Circle Award in 1962. His compositions include six other operas, six symphonies, a number of works for band, chamber music, choral works, songs, and piano pieces.

Ward completed his Third Symphony in February 1950 on a commission from William Strickland and the Friends of Music of Dumbarton Oaks, where he himself conducted the premiere on March 31. That summer he revised the work slightly, expanding it from chamber ensemble to chamber orchestra by adding trumpet and allowing for string sections rather than single strings. The revised version received its first performance on February 13, 1951, at the Peabody Institute by the Peabody Conservatory Orchestra, conducted by Jan Tomasow.

The introduction to the first movement begins with chords that strike like a bolt of lightning. From their eerie, sustained sound, a plaintive oboe solo emerges, its twelve-tone configuration masked by the composer’s highly Romantic style. The introduction’s closing idea, with its repeated notes and interior leap, reappears in the vigorous main theme of the fast main section. A contrasting sweeter theme, which begins hymnlike over a “walking” bass, lends a touch of “Americana” to the movement. The somber conclusion comes only after a series of dramatic dialogues and swiftly changing textures in the development and an imaginatively varied recapitulation.

The lovely middle movement also unfolds from sustained chords and an expressive oboe solo, but soon becomes the domain of the piano in an extended lyrical melody replete with trills over gently pulsing accompaniment. The prominence of the piano here stems from an idea Ward once expressed, that he would “like to include wonderful moments from piano solos and concerti into a symphony.” Other instruments take over the melody, around which Ward weaves exquisite countermelodies. A repeated-note idea injects slight agitation, undulating chords and wedge-shaped lines slip in, and lyrical Romantic solos surge, all leading back to the piano’s brief reentry before the serene close.

The merry rondo finale would sound right at home in an old-time action/adventure romp. Rhythmic repeated horn notes and impish wind jabs launch a rollicking theme that bounds upward several times before swirling in Romantic counterpoint. Unison calls and bustling strings bring a return of the upward leaps before a jaunty new tune enters, initially colored by winds and piano, then tossed about with great abandon. The next recurrence of the upward leaps in the horns brings a cascading string effect and a piquant piccolo-clarinet, which in turn introduces oboe and clarinet solos over dancing pizzicatos. Among other delightful effects, the jaunty theme returns “rudely” in the horns, and the piano provides sparkle and energetic two-note descending jumps, all driving charmingly to the precipitous unison conclusion.

In 1878 Kotek visited Tchaikovsky in Clarens where the composer was recovering from his disastrous marriage. Kotek offered advice on the solo violin part of the Concerto, which Tchaikovsky had begun in March and completed by the middle of the month. They played it through for Tchaikovsky’s brother Modest on April 1, and their dissatisfaction with the original slow movement led the composer to discard it and write another. (The discarded movement later turned up as one of the violin-piano pieces in Souvenir d’un lieu cher.) Auer was to premiere the work and thus “took over” the dedication from Kotek, who had abandoned his plan to learn the work. Yet just as Rubinstein had rejected the First Piano Concerto, Auer pronounced the Violin Concerto impossible to play, which “had the effect,” wrote Tchaikovsky in his diary, “of casting this unfortunate child of my imagination for many years to come into the limbo of hopelessly forgotten things.”

Two years later Tchaikovsky heard from his publisher Jürgenson that Brodsky had learned it and would play the premiere in Vienna. The performance on December 4, 1881, under Hans Richter caused a great stir, as recorded by many critics. Only two out of ten had favorable things to say, and the supreme venerated critic Eduard Hanslick wrote such a nasty attack that Tchaikovsky never forgave him. Hanslick—an arch conservative in the days when critics had less wide-ranging tastes—had just the year before given a glowing report of Brahms’s new Violin Concerto and could hardly have been expected to like such a dissimilar work. Brodsky valiantly continued to champion the Concerto, and thus Tchaikovsky finally dedicated it to him, although he had certain problems with it as well. In Auer’s defense it should be said that he changed his opinion of the work (again following Rubinstein’s pattern) and not only played it everywhere himself but taught it to his many famous pupils, including Jascha Heifetz.

After the orchestral introduction, the solo violin introduces the first subject, whose lyrical character could do as well for a second subject. Nor does the actual second subject provide great contrast as in the Classical tradition. There are, however, plenty of fireworks in the movement, especially in the cadenza, which in the manner of the Mendelssohn Violin Concerto creates an elision with the orchestral recapitulation. After the beautiful second movement, Canzonetta, with its graceful melodies, the finale bursts upon us with what Hanslick unfairly described as the “brutal and wretched jollity of a Russian kermess—we see wild and vulgar faces, we hear curses, we smell bad brandy.” The second section, which is more relaxed compared to the dash of the rest of the movement, still preserves the atmosphere of rustic festivity with its simple melody over a drone bass. In this light-spirited rondo the violinist’s opportunities for display are dazzling.