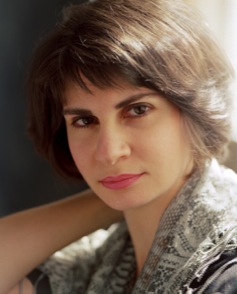 Before immigrating to the United States, Marina studied at the Kiev Conservatory where she became the youngest First Prize Winner of the all-Kiev Piano Competition. Her principal teachers include Leonid Lazarevich Fundiler and the late Valery Sagaidachny in the Ukraine and Natalya Antonova, Jerome Lowenthal, and Barry Snyder in the United States.

Lomazov is Associate Professor of Piano at the University of South Carolina School of Music where she is also the founder and artistic director of the Southeastern Piano Festival.  Lomazov is a Steinway Artist. For more information please visit www.marinalomazov.com

In June 1868 Grieg traveled with his wife Nina and baby daughter to Denmark to undertake his largest-scale work to date, a work for piano and orchestra. Notorious for his inability to work with the slightest outside disturbances, Grieg settled down in the picturesque town of Sölleröd while Nina and the baby went to Nina’s parents in Copenhagen. Two of Grieg’s friends were with him in Sölleröd, publisher/composer Emil Horneman and virtuoso pianist Edmund Neupert, who consulted with the composer as the work took shape. It was only natural that Neupert should receive the dedication and play the first performance, which was scheduled for shortly after Christmas.

Though the Concerto was completed in rough form at Sölleröd, the orchestration had to be fit around Grieg’s many other duties that fall and winter in Oslo. This proved so difficult that the premiere had to be postponed until April 3, 1869, when Neupert indeed played the solo part with the Royal Theater Orchestra in Copenhagen, conducted by Holger Simon Paulli. It was a major event: Queen Louise was in attendance, as were the leading musical personalities, including Johann Peter Emilius Hartmann, Niels Gade, and world-famous Russian virtuoso pianist Anton Rubinstein, who had lent his own grand piano for the occasion. On April 6 Neupert wrote to Grieg who had been unable to attend:

On Saturday your divine Concerto resounded through the Casino’s large auditorium. The triumph I received was really tremendous. Already at the conclusion of the cadenza in the first part the audience broke out in a true storm [of applause]. The three dangerous critics—Gade, Rubinstein, and Hartmann—sat up in the loge and applauded with all their might.

The Concerto soon won international fame and has achieved the same kind of ultra-popularity as Tchaikovsky’s B-flat minor Piano Concerto. At a now famous meeting between Grieg and Liszt in Rome in 1870, Liszt fulfilled Grieg’s expectations by reading Grieg’s Concerto at sight. “He played the cadenza, the most difficult part, best of all,” wrote Grieg. “Not content with playing, he, at the same time, converses and makes comments, addressing a bright remark now to one, now to another of the assembled guests, nodding significantly to the right or left, particularly when something pleases him.” Liszt was delighted with Grieg’s Concerto and Grieg incorporated some of his suggestions when it was published in 1872.

Grieg greatly admired Schumann’s Piano Concerto in the same key and claimed that he studied it in depth before writing his own. He followed Schumann’s model in regard to an opening fanfare for the pianist, and in certain formal respects, but he created a completely independent work—one that contains specifically Norwegian elements. One of these occurs between the main theme and second theme, a transitional passage containing rhythms of the halling, a lively Norwegian folk dance in duple meter. Grieg’s reputation as a melodist is reaffirmed by the lyrical second theme, which since an 1882 edition has been played by the cellos, as opposed to the trumpet in the manuscript and early editions. Grieg continued to tinker with the Concerto throughout his life, making final revisions as late as 1906–07.

The tender, nocturnal slow movement follows a simple A-B-A pattern, leading without pause into the finale through a magical dialogue between the piano and solo horn. The nationalistic character of the last movement is evinced through the main theme in the piano, again reminiscent of the halling. Grieg scholar Schjelderup-Ebbe also likens the use of pedal point, open fifths, and sharp dissonances to the sounds of the Hardanger fiddle. The halling refrain near the end is transformed into another folk-dance rhythm, that of thespringar in 3/4 meter. It was the concluding climax of the movement with its sudden use of the flattened leading tone that so excited Liszt in 1870. Grieg reported:

Toward the end of the finale the second theme is, as you may remember, repeated in a mighty fortissimo. In the very last measures, when in the first triplets the first tone is changed in the orchestra from G-sharp to G, while the piano part, in a mighty scale passage, rushes wildly through the whole reach of the keyboard, he [Liszt] suddenly stopped, rose up to his full height, left the piano, and with big, theatric strides and arms uplifted walked across the large cloister hall, at the same time literally roaring the theme. When he got to the G in question he stretched out his arms imperiously and exclaimed “G, G, not G-sharp! Magnificent! That’s the real Swedish article!” . . . He went back to the piano, repeated the whole strophe, and finished. In conclusion he handed me the manuscript, and said in a peculiarly cordial tone: “Keep steadily on: I tell you, you have the capability, and—do not let them intimidate you!”

Brahms was plagued by self-doubt perhaps more than any other great composer. Despite having already composed masterful symphonies and numerous other works, he still doubted the merits of his new symphony and sought advice and encouragement. His comments about his Fourth Symphony show the typical mixture of indifference, pride, worry, and tongue-in-cheek self-deprecation that accompanied his most diligent efforts. Brahms sent the completed first movement to his friend Elisabet von Herzogenberg in the summer of 1884, saying:

May I dare to send you a piece of mine, and would you find time to look at it and send me a word? On the whole, unfortunately, my pieces are better than I am and are less in need of correction and admonition. But the cherries never get ripe for eating in these parts [a high altitude spa in Mürzzuschlag, Styria], so don’t be afraid if you don’t like the taste of the thing.

Unfortunately nothing came of the piano concerto that I should have liked to write. . . . But I do have a couple of entr’actes; put together they make what is commonly called a symphony. . . . I’m . . . wondering by the way whether it would have much of an audience.

The manuscript for the Symphony was almost destroyed in the summer of 1885 when a fire broke out in the apartment building where Brahms was staying. Brahms ran out to help save tools in the carpenter’s shop, seemingly indifferent to the possibility that all his own hard work might go up in flames. A friend managed to rescue the manuscript, but Brahms’s comment was, “Poor people have more need of help than I.”

In September 1885 the composer and Ignaz Brüll tried out the Symphony in a two-piano arrangement for a small circle of friends. The Symphony did not greatly impress them and Brahms’s worry increased. Kalbeck (Brahms’s future biographer) went so far as to recommend that Brahms throw the scherzo into a wastepaper basket and publish the finale as a set of variations, and that he write a more fitting conclusion to the Symphony. It is fortunate that Brahms did not heed this advice, that he waited to hear the whole with orchestra as it should be.

The first performance was given October 25, 1885, with the Meiningen orchestra, well-rehearsed by von Bülow, then conducted by Brahms. The audience applauded each movement, especially the scherzo. True to form, Viennese audiences were slower to take up the Symphony’s praise, perhaps because it was less well-rehearsed there, but soon audiences everywhere hailed the Fourth as a masterpiece.

The first movement is based on sonata form, but of much broader conception than traditional Classical models, exploiting novel harmonic possibilities and thematic variation. Many of the themes, beginning with the first, are based on a falling third, an interval Brahms used repeatedly in building the entire Symphony. In the first movements of his first three symphonies he had opened with an introductory gesture. Here he ingeniously begins the first theme at once as if “out of thin air,” but his manuscript shows that this decision came only with second and third thoughts—an intermediate stage shows the addition of a few simple chords (a plagal cadence) as introduction, which he ultimately considered extraneous.

He also broke with his preceding symphonies by choosing not to repeat the first-movement exposition in the Classical manner. He may have done this in consideration of the movement’s weighty proportions, but more likely he was reacting to a new sense of balance between the sections of sonata form and the distance the exposition had traveled, which made going back to the beginning seem inappropriate. It is hard to imagine that this wonderful stroke was once upsetting to audiences.

Another noteworthy feature of this movement is the disguised hushed entrance of the recapitulation, something Romantic composers reveled in and at which Brahms excelled. The main theme enters “prematurely” in elongated tones—thus separated from its usual surroundings—so that by the time the accompaniment and rhythm of the opening seem to announce the recapitulation, the main theme has already progressed several measures.

The Andante moderato is one of the most beautiful slow movements ever written. The major key sets an idyllic mood in contrast to the minor of the previous movement, but there is a sense of continuity since they are both anchored on the same tonic. Brahms arrives at this parallel major in an inspired way, beginning the melody on the tonic in the horns, but suggesting the old Phrygian mode until the clarinets provide the turn to the tonic major. The theme is varied and enriched, out of which comes a sublimely lyrical melody introduced by the cellos.

The Allegro giocoso, an exuberant outburst in sonata form, serves as a scherzo. Brahms indulged in one of his great harmonic fondnesses by setting it in a cheerful C major, which relates to the other movements by the interval of a third. Brahms added triangle, contrabassoon, and a third timpani to the playing forces to enhance the ebullient mood.

The celebrated finale is structured as a passacaglia. A favorite form in the Baroque era, a passacaglia is a set of variations on a short subject, usually introduced in the bass, but which can weave itself into the texture, sometimes conspicuous, sometimes hidden. Brahms had been considering the idea of a symphonic movement based on such a form as early perhaps as 1880, when he played the Chaconne from Bach’s Cantata 150 for von Bülow. Brahms’s eight-measure theme is announced by winds and brass; the trombones have been saved for this moment. The outlines of sonata form have been imposed over the variations, thus one hears a kind of recapitulation beginning with the eight-chord sequence, after a quieter middle section including variations featuring flute solo and trombone chorale-like passages. Brahms was criticized as archaic and later hailed as innovative for his use of a passacaglia as the crowning movement. His formal experiment is unique in the history of music and remains a superbly dramatic conclusion for his powerful last symphony.