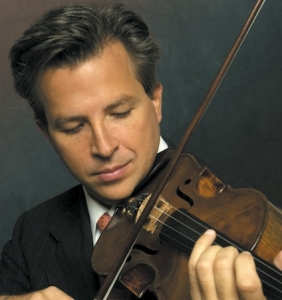 Violinist Michael Ludwig enjoys a multi-faceted career as soloist, recording artist and chamber musician. His appearances as soloist include those with the Chicago Symphony Orchestra and the Philadelphia Orchestra.

His numerous recordings include the Corigliano Red Violin Concertowith JoAnn Falletta, a frequent guest conductor at the Brevard Music Center. As a chamber musician, he has shared the stage with acclaimed artists, such as Christoph Eschenbach, Wolfgang Sawallisch, Yefim Bronfman, Sarah Chang and Jean-Yves Thibaudet. He has been featured numerous times on NPR’s Performance Today.

Mr. Ludwig performs on a rare violin made in the late 1700’s by the Cremonese master Lorenzo Storioni. His violin has been lauded by a reviewer in Fanfare magazine as “one of the most gorgeous instruments I’ve ever heard.”

He studied violin with his father, Irvin Ludwig, a violinist in the Philadelphia Orchestra. He attended the Curtis Institute of Music and the University of the Arts in Philadelphia and has studied with Josef Gingold at Indiana University. Mr. Ludwig has served as concertmaster of the Buffalo Philharmonic since 2006.

Soprano Diana Amos has performed leading roles in more than 25 German opera houses. Career highlights include the role of the Queen of the Night in Mozart’s The Magic Flute at the Berlin State Opera, Olympia in The Tales of Hoffman at the Semper Opera in Dresden and the Cologne Opera, and Zerbinetta in Ariadne auf Naxos in Hannover.

Ms. Amos is a graduate of the Oberlin Conservatory of Music and received a vocal performance diploma from the Hochschule fur Musik in Cologne, Germany

Bass-baritone Jacob Will has sung for many years with the Zurich Opera. He also has appeared with New York City Opera, Vancouver Opera, the Bavarian State Opera and San Francisco Opera. He made his New York Philharmonic debut as soloist in the American premiere of the “Messa per Rossini.”