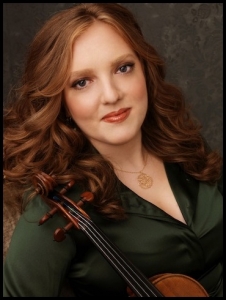 In both life and art, violinist Rachel Barton Pine has an extraordinary gift for connecting with her audiences. She has received worldwide acclaim for her virtuosic technical mastery, lustrous tone and perceptive performances.

During the 2009-1010 season her performances included recital debuts in Japan and New York City, and appearances with the Israel Chamber Orchestra, Turku (Finland) Philharmonic, and the Gottingen, Vancouver, Sacramento and Syracuse Symphonies.

In recital she has performed the complete Paganini Caprices and the complete Bach Sonatas and Partitas (each cycle in a single evening). She was the second violinist to play John Corigliano’s entire Red Violin Concerto, working closely with him on the interpretation.

Pine has appeared as soloist with many of the world’s most prestigious ensembles, including the Chicago, St. Louis, Dallas, Montreal, Atlanta and Baltimore Symphonies and the Philadelphia Orchestra. Overseas, she has, among others, performed with the Vienna and Budapest Symphonies and the Royal Philharmonic. She has worked with such renowned conductors as Charles Dutoit, Zubin Mehta, Erich Leinsdorf, Neeme Jarvi, Marin Alsop and Placido Domingo.

Pine holds prizes from several of the world’s leading competitions, including a gold medal at the 1992 J.S. Bach International Violin Competition in Leipzig. She was the first American and, at age 17, the youngest person to ever win this honor. Other top awards came from the Queen Elisabeth (Brussels 1993), Kreisler (Vienna 1992), Szigeti (Budapest 1992) and Montreal (1991) International Violin Competitions.

A Chicago native, Pine began violin studies at age three and made her professional debut four years later at age seven with the Chicago String Ensemble. She first appeared with the Chicago Symphony at age ten. Pine resides in Chicago with her husband. She performs on the Joseph Guarnerius del Gesu (Cremona Italy, 1742), known as the “ex-Soldat” on generous loan from her patron.

Join us before the concert to hear Franklin Keel, our principal cellist and featured soloist in the upcoming November 14th concert performing in the Porter Center’s Scott Commons area beginning at 2PM. See you there!

Excerpts from the review by Laura McDowell of the  September 26, 2010 Brevard Philharmonic concert with Rachel Barton Pine, violinist, as found on Classical Voice of North Carolina:

The program opened with Beethoven’s Overture to Fidelio, Op. 72.  This worked well as a concert opener; the orchestra sounded focused, energized, and cohesive throughout. The Beethoven was a perfect foil for the Mendelssohn Symphony No. 5, Op. 107 (“Reformation”), played just before intermission.  This dignified symphony which is so redolent of grand ceremonial music inspired some of the afternoon’s finest playing.  The chorale music in the first movement, played by the brass against string obbligatos, was as stirring as the hushed sounds of the “Dresden Amen” in the strings were moving.  The finale is a glorious summation in which Mendelssohn recalls the “Dresden Amen” and introduces Luther’s chorale “Ein feste Burg” in some of the grandest music he ever wrote. To amp things up, there are fugal passages and places where the music builds to stunning climaxes, and the orchestra rose magnificently in those moments.

The music after intermission consisted solely of the Bruch Scottish Fantasy. The plaintive Introduction was a showcase of lyrical depth and great beauty. The second movement, a lively dance, was followed by a gorgeous Andante sostenuto. Here the technical demands are those of sustained lyricism, and every note was put in its proper place. The finale has the most fiery passagework which Pine played effortlessly and without affectation. Her encore consisted of two Scottish tunes from the 1740s, “The Lament of Flora MacDonald” and an old bagpipe tune with principal cellist Franklin Keel supplying the drones.