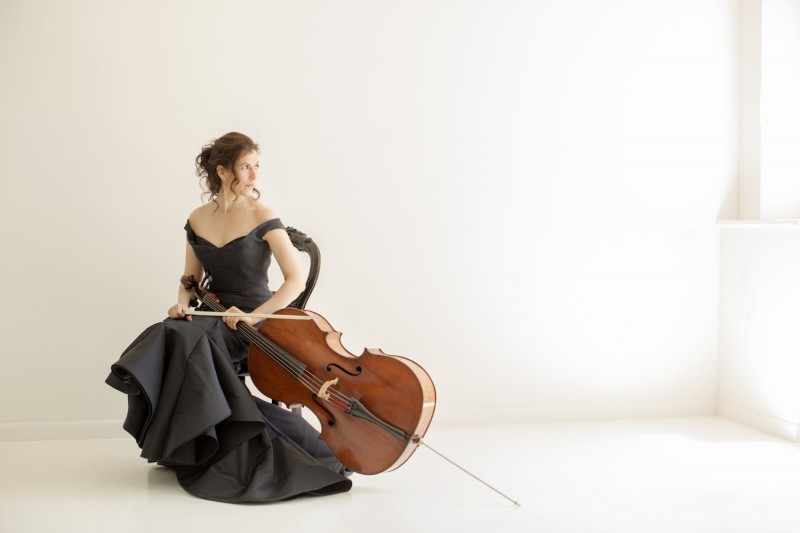 Inbal Segev’s playing has been described as “characterized by a strong and warm tone . . . delivered with impressive fluency and style,” by The Strad and “first class,” “richly inspired,” and “very moving indeed,” by Gramophone. Equally committed to new repertoire for the cello and known masterworks, Segev brings interpretations that are both unreservedly natural and insightful to the vast range of solo and chamber music that she performs.

Inbal Segev is currently recording all of Bach’s cello suites at the Academy of Arts and Letters in New York City for release in September 2015. Audiences will have the opportunity to look behind the scenes at the making of Segev’s album through a companion documentary currently being filmed about her journey through the music of Bach. In February 2015, she made the world premiere recording of Lucas Richman’s Three Pieces for Cello and Orchestra with the Pittsburgh Symphony Orchestra for release in fall 2015. Segev’s discography also includes Sonatas by Beethoven and Boccherini (Opus One), Nigun (Vox), and Max Schubel’s Concerto for Cello (Opus One). With the Amerigo Trio she has recorded serenades by Dohnányi (Navona).

Segev’s repertoire includes all of the standard concerti and solo works for cello, as well as new pieces and rarely performed gems. She has premiered cello concertos by Avner Dorman (with the Orquesta Sinfónica Nacional de Colombia in Bogota, Anchorage Symphony Orchestra, Youngstown Symphony, and Hudson Valley Symphony); Max Schubel, whose concerto was written for Segev and is available on the Opus One label; Maximo Flugelman in a performance led by Lorin Maazel at the Castleton Festival; and Lucas Richman.

Composer Gity Razaz is currently at work on a new multimedia piece for Segev, which will premiere in spring 2015 during the Ferus Festival in New York and explores the themes of birth, transformation and death through the retelling of an Azerbaijani folktale. Segev also gave the U.S. premiere of English composer Sir Arthur Sullivan’s Cello Concerto in D Major, which was written in 1866 but was never published. She performed jazz musician and composer David Baker’s cello concerto at Town Hall in New York, and was the first cellist to perform Henri Dutilleux’s challenging Trois strophes sur le nom de Sacher for solo cello at Carnegie Hall.

Segev has also performed as soloist with orchestras including the Boulder Chamber Orchestra, Helsinki Philharmonic, Radio Symphony of Helsinki, Reutlingen Symphony, Dortmund Philharmonic, the Orchestre National de Lyon, the Bangkok Symphony, and with all the major orchestras of Israel. She made debuts with the Berlin Philharmonic and Israel Philharmonic, led by Zubin Mehta, at age 17.

Segev is a founding member of the Amerigo Trio with former New York Philharmonic concertmaster Glenn Dicterow and violist Karen Dreyfus. The three first performed together at the Bowdoin International Chamber Music Festival in 2007, and came together formally in 2009 as the Amerigo Trio. Since then they have been invited to play at some of the most prestigious concert series in the country, including Lorin Maazel's Castelon Festival in Virginia, The Hotchkiss School in Connecticut, the Concord Chamber Music Society in Massachusetts, Tannery Pond Concerts in the Berkshires, and Dumbarton concerts in Washington, DC. The ensemble is named after the Italian explorer Amerigo Vespucci.

In addition to her work with the Amerigo Trio, Segev has collaborated with artists such as Emanuel Ax, Agustin Dumay, Pamela Frank, Gilbert Kalish, Michael Tree, and the Vogler Quartet at venues and festivals including Carnegie Hall’s Weill Hall, Bargemusic, and the Guggenheim Museum in New York; the Banff, Ravinia, Olympic, Cape & Islands festivals in North America; the Sienna, Rolandseck, and Montpelier festivals in Europe; and the Mishkenot Sha’ananim and Upper Galilee festivals in Israel. She has toured the US with the American Chamber Players since 2003 and previously played with the Jupiter Chamber Players.

Inbal Segev (pronounced Inn-BAHL SEH-gehv) lives in New York with her husband, and three young children – twins Joseph and Shira, and Ariel. Segev performs on a cello made by Francesco Rugeri in 1673. She is managed by Barrett Vantage Artists.