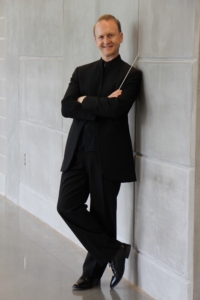 After an extensive search process, Brevard Philharmonic is please to announce James Fellenbaum as its new Artistic Director/Conductor. James, who has been a guest conductor for a Brevard Philharmonic concert in each of the last two seasons, enthusiastically accepted the position stating, “I am thrilled and honored to be joining the Brevard Philharmonic. It has been a joy for me to get to know many of the musicians, administration, and board as well as the wonderful patrons and supporters of this organization. I am extremely excited to begin working with my many new colleagues and friends to bring wonderful music to the community of Brevard!”

Brevard Philharmonic Board of Directors President, Carole Futrelle, in commenting on the search process said, “The search committee went above and beyond the call of duty in their examination of each applicant in relationship to the needs and future of the Brevard Philharmonic. Untold hours were spent on behalf of the Philharmonic with the committee weighing multiple factors to determine a candidate’s fit for the position. Of course, first and foremost is the strength as a musical director – comprehensive understanding of the music. But there is so much more – from personnel and patrons to the ability to control the budget and manage our particular schedule. This is an exciting time, and I look forward to Jim’s creativity and willingness to carefully guide the Philharmonic into our next phase. We also expect to benefit from his extensive work with youth and young orchestras. I have such a positive anticipation for what Jim Fellenbaum will bring to Brevard and the growth of our Philharmonic.” Futrelle went on to comment that next season’s dates have been established and will be announced shortly. Season ticket holders will have the opportunity to keep their current seats or make changes before tickets go on sale to the public.

Describing the selection of Fellenbaum, Committee Chair, Jan Hart, said, “The Search Committee comprised of members of the Philharmonic board, musicians, and the community was formed in February 2017. There were 54 applicants who all submitted a letter of interest, resume, conducting video, sample programs, and at least three professional references. After thorough review of this material the number was reduced to 10 semi-finalists, and following reference calls and phone interviews we selected the four finalists who each conducted one of this past season’s concerts. Finally, the recommendation to the board of Jim Fellenbaum’s appointment was made after considering feedback from the search committee, board, and staff meetings, musician and audience surveys, pre-concert and stage comments, and rehearsal observations. We had four outstanding finalists, but we believe Jim is the best fit for the organization, the musicians, and our audience.”

The repertoire he conducts is broad and diverse, being equally comfortable with classical masterworks, pops, ballet, opera, and choral-orchestral works. He has substantial experience working with orchestras similar to Brevard Philharmonic and has developed versatility in programming to the strengths of the orchestra and desires of the community.
James is currently Resident Conductor with the Knoxville Symphony, conducting masterworks, chamber classics, educational and young people’s concerts, and outreach/community partnership concerts. He is also the Music Director of the Knoxville Symphony Youth Orchestra and the Director of Orchestras at the University of Tennessee, Knoxville.